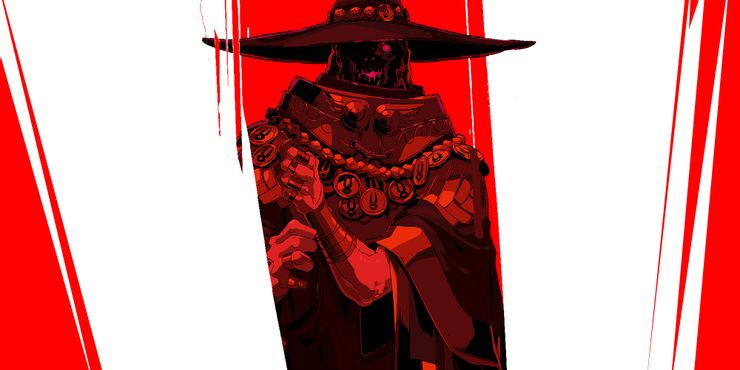 whether it’s the Fury Sisters, Hypnos, Asterius, or any of the other characters that aren’t on center stage very often. But, it’s likely that no one out there expected them to give the literal concept of Chaos itself a physical form, or that it would be so immediately recognizable. Chaos is the Primordial Void (again, technically not a God, but equal or greater to them in power) that Nyx and all the other Titans (such as Chronos or Gaia) rose out of, so he’s sort of like Nyx’s father. Now, as far as his impact on gameplay is concerned, Chaos is inarguably one of the stronger Boon-granting Gods in the game. Because his Boons offer great rewards in exchange for taking a great risk for a certain amount of encounters, finally “unlocking” each Boon feels more rewarding than just getting one for free from any of the Olympic Gods.

Chaos is incredibly well done. His design screams “beyond mortal comprehension” like some of the other Olympic God designs, yet he sticks out like a sore thumb compared to them. The best aspect of Chaos’ design that people don’t talk about enough is how you can see aspects of it in his children and grandchildren. Whether it’s the white hair he has that both Thanatos and Hypnos have, the faces on his lower section and the red jewelry and how similar they look to the accessories that both Nyx and Hypnos wear, or even just his strong and stoic facial features that all his descendants share.

Artemis: The Goddess Of The Hunt

One of the underdogs of Olympus, Artemis, Goddess of the Hunt, is a lot like Ares in that she’s all about one specific thing, and that’s burst damage in the form of critical hits. Basically, all of Artemis’ Boons have to do with giving Zagreus extra crit damage, “marking” enemies so that they’re easier to crit, or just granting him more crit chance in general. It’s a statistic that can be insane if it triggers often, and completely worthless if it doesn’t. But, because a lot of the weapons in Hades hit pretty rapidly (especially when upgraded using Titan’s Blood), there are a ton of chances to crit throughout a run compared to other games where the weapons swing/attack a bit slower. Artemis lands squarely in the middle to the upper-middle in terms of ranking her gameplay impact compared to all the other Gods.

That said, as a character in Hades:

she’s one of the best. Her design is so immediately recognizable as something related to hunting. Because she doesn’t hold domain over the sky or ocean, the other Gods look down on her a bit, so her dialogue with Zagreus shows that. She’s a bit of a loner, and players can feel that in her dialog. Yet, out of all the Gods, Artemis is likely one of the most relatable and most enjoyable to talk to. And, seeing her interactions with other Olympians or just even Zagreus when she feels betrayed by him is so interesting and different from the rest.

Hermes: The God Of Swiftness

Players probably weren’t expecting someone like Hermes to be near the top of the list, but there are actually quite a few reasons he deserves this spot.

But, are his Boons really good enough to Why are they so good? Well, it comes down to three things:

Boon alone makes the game easier by an entire level, simply because it gives Zagreus one more Dash to work with. Then there’s his Keepsake, the Lambent Plume, which can “dependably” buff Zagreus’ innate speed and dodge chance a ton if players focus on clearing rooms quickly. To put it bluntly, this speedy God is sort of the complete package.

Demeter: The Goddess Of Seasons

Some might forget how powerful Demeter is since she tends to get relegated to the “Goddess of Harvest” more often than not. But, this seasonal Goddess has control over life and death itself. She’s Zeus’ sister after all, and one of the oldest Goddesses in the pantheon. Her design is one of the least “stereotypically attractive” in the game, making it one of the more creative as well, as it meshes perfectly with the wisdom she imparts onto Zagreus while also making her stick out in the player’s minds as someone different from the rest.

In-game, she acts as a sort of standoffish grandmother to Zag:

who really warms up to him the further her Bond progresses. She, like Athena, is pretty standoffish and cold, but players can immediately feel her intention through her voice acting, and she does have a character arc over the course of the game. Mechanically, her Boons are top-notch. The “Chill” status effect, in particular, is one of the best for a few reasons:

Plus, Demeter’s Boons are much more versatile than say Ares’ or Artemis’. In particular, the “Rare Crop” Boon, is worth its weight in gold.

Persephone: The Queen Of The Underworld

Yes, Persephone does show up in the game, and her depiction in Hades is really inventive. It’s not how players expected her to look, talk, or act. Usually, film and game media loves to portray Kore (her real name) as the naive and sheltered daughter of Demeter who is overly energetic and woefully naive, but Supergiant decided to make Persephone a dependable, independent, and very capable Goddess.

Great Games That Are Better On Switch (According To Metacritic)

Frankly, in terms of character and design, Kore should be higher, but sadly, she doesn’t offer any Boons so that’s sort of a big mark against her. That said, she does offer something amazing to Zagreus, The Pom Blossom, her very own Keepsake that is easily top-tier compared to the other Keepsakes. It’s a shame she doesn’t give it to Zag until the last 20-30% of the game, but still. Oh, and let’s not forget her second “design” she gets later, which only serves to show both her authority and versatility.

Thanatos: The Incarnation Of Death

Thanatos is the Greek Version of the Grim Reaper, simple as that. Some people might think Hades fits that role better, but he’s more like the Grim Reaper’s boss who’s always stuck behind a desk. Due to him growing up with Zagreus, the two have a very deep bond, which means Thanatos gets more opportunities throughout the game for characterization and growth. Honestly, his relationship with Zagreus and Megara is one of the sweetest things in this game, and it only gets better the further players get in the story. Supergiant Games did a fantastic job writing a believable character arc for the collector of souls. Thanatos steadily opens up and connects more to the people around him, whether it’s his mother Nyx, his brother Hypnos, or especially Zagreus.

Thanatos is another character that doesn’t grant any Boons:

but he does have his own type of “encounter” found throughout Zagreus’ escape attempts. Basically, whenever Than is found in a run, it becomes a competition between him and Zag to see who can kill more enemies within a span of time. If Zagreus wins, he gets a Centaur Heart; if Thanatos wins, Zag gets nothing. Now, comparing a small Max HP buff to the Boons the Olympic Gods give out isn’t fair. Thankfully, Thanatos also has a Keepsake (The Pierced Butterfly) and a Chthonic Companion (The Companion “Mort”) that he gives to Zagreus, both of which are incredibly useful.

Athena: The Goddess Of Wisdom

Athena’s design in Hades is superb. It’s completely unique and yet, such a perfect representation of the Goddess of Wisdom, War, and Strategy. The armor, the elegant hairstyle, the shield-shaped earrings, her armor that mixes both practicality and aesthetic, and even her power stance all add up to create an amazing design greater than the sum of its parts. Plus, her Boons are inarguably the best in the game overall.

which reflects attacks back on enemies, both avoiding damage and inflicting damage at the same time. Frankly, even if this list was only taking her Divine Dash Boon into account, Athena would still be near the top, it’s just that good of a Boon. Plus, Athena:

Really, her only flaw is how flawless she is, making her sort of a boring character in comparison to a lot of the others. But even then, she does steadily grow with the other Gods, and her dialog is always interesting to read.

Nyx: The Incarnation Of Night

Zag’s second mom, the character every player wishes was their mom, the literal incarnation of night, and the original ruler of the Underworld before Zeus gave the title to Hades. Now, sadly, Nyx doesn’t have any boons to offer Zagreus, but she does have the Black Shawl Keepsake that she gives to Zagreus. As a design, Nyx is by far one of the best is in Hades. The cosmos patterning in her head shawl, her strong but elegant facial features, the crescent moon-shaped shoulder accessories, it all just works so well. Frankly, out of the entire cast, Nyx looks the classiest.

And, as far as her characterization is concerned:

Nyx is flawless like Athena, yet still somehow has one of the best character arcs overall. She just seems like a complex character, a fantastic worker, and a great mother to just about all of her children. It says quite a lot that even Hades himself listens to Nyx without argument most of the time and she’s certainly one of the most powerful, likable, and memorable characters Supergiant has ever created.

Charon: The Boatman Of The Underworld

Ah, Charon, another one of the fan-favorite characters of the game who is surprisingly lovable and empathetic given his overall imposing appearance. Charon is the Boatman of the Underworld, as well as the NPC who runs the shop Zag can use throughout runs. At first, it may seem like Charon is weak compared to the other deities Zag meets in the Underworld, but dialog from many characters of the House of Hades reinforces the fact that this boatman is exceedingly strong.

He’s another one of Nyx’s children:

though he doesn’t seem to be an incarnation of any concept like Sleep, Night, or Death. Instead, Charon is just a reliable worker that everyone in the Underworld (and even some on Olympus) heavily depend on. And, he seems to care deeply for Zagreus, which only gets cuter the further along a player gets in the storyline and reveals all the things Charon has done for them. Now, as far as gameplay is concerned, Charon sort of does it all. He’s a Merchant, an optional boss fight, owner of the Well of Charon, and giver of the Bone Hourglass Keepsake. He really does contribute to the game in just about every way possible, making him one of the best characters in the game, both mechanically and narratively.

Zagreus, the game’s big protagonist, is a God, too. Of what, however, even he’s not sure yet, but he absolutely counts as one. Mythos states that Zag is the God of Rebirth and Blood, and that makes sense considering the actual structure of the game as a roguelike. He’s also an interesting character that actively grows, adapts, and changes throughout the course of the story.

This is especially unique because:

if there’s one thing people know about the Olympic Gods, it’s that they’re stubborn and unchanging. His accent, line delivery, and the absurd amount of reactions he has to every situation also make him so innately charming that players might just fall in love with him as a character without even realizing it.