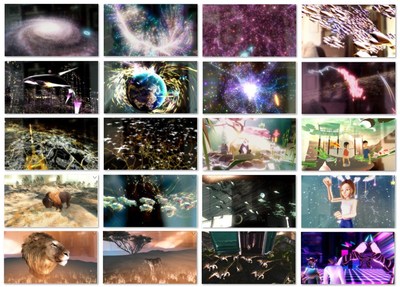 When you enter the metaverse, you’re no longer just a passive viewer, but an active participant in the storey, like the holodeck in Star Trek,” Lankesar said.

In fact, Lankesar was inspired by sci-fi and holodecks while developing Visualax, which transports users to a variety of interactive, immersive worlds. Space, AI, robots, dinosaurs, animals and virtual life are just a few of the worlds in which these stories take place.

“New technology in the app that will revolutionise the industry will allow you to explore worlds that no one has ever been able to create before, without slowing down or overheating your phone. To date, the difficulty of using augmented reality apps on mobile devices has kept the technology from gaining widespread adoption “says the Lankesar.

In the Visualax metaverse, users can swim with hundreds of fish, travel through thousands of galaxies, and fly with a dragon that takes them to a variety of themed movie adventures. In a new artistic way, the visual effects, characters, and 3D objects all respond to the music.

An A.I. character in Visualax helps people relax by posing questions about their lives and letting them see animals and digital art around them.

Play The Starring Role In The World

In Jurassic Feathers, users can move around with dinosaurs while listening to classical music. With a spacesuit and the Golden Record, they can also boldly go where no one has gone before, exploring the wonders of interstellar space and peering back at Earth. This film was based on Voyager, which was launched in the 1970s.

In no time, you’ll be able to play the stars like violins by merely swiping your phone in front of them.

This metaverse documentary about the last buffalo is also a work of art based on actual events. When millions of Buffalo roamed North America’s great prairies, this game lets you experience their demise.

As a result, visitors can learn about the importance of these animals to Native American culture and how their extinction affected their way of life.

By increasing the buffalo population and making it illegal to hunt them, Yellowstone National Park saved the species from extinction. Lankesar was able to create the animal’s fur thanks to new technology. When you touch the buffalo, it responds.

“Visualax is a multimedia storytelling, music, and education company. Even the documentaries are based on stories with characters that educate you on a variety of topics, such as global warming, health, and well-being, for example “That’s what Lankesar said.

Getting started in the Visualax metaverse is simple

An AR or VR headset is not required for use. Premium content is available in the Visualax app, which can be downloaded for free from Google Play or the Apple Store. Uses a smartphone’s gyroscope and touch screen to navigate the 3D AR metaverse in a new way.

For mobile devices, Visualax’s metaverse engine is fast to load and optimised for tablets and smartphones, with no long wait times. Because no scanning of surfaces is required, users can sit back and relax while they watch.

The internet and entertainment will take a quantum leap forward with the help of Visualax’s metaverse. Education and eCommerce will benefit from it as well.

By creating new virtual worlds, Lankesar wanted to provide an escape from the realities of life. Relaxation of the eyes is the root of the name Visualax.

“My friend, who is in his 60s, was able to appreciate the immersive nature of the movies and music thanks to the app’s ease of use. I want to make the metaverse available to everyone and demonstrate that it isn’t just about the marketing but also about the content’s accessibility “says the Lankesar

“Using Visualax, I believe I have achieved my goal of creating a metaverse world as close to the holodeck as possible. The best part is that you can easily use it on your phone. I wish you all the best on your journeys. Metaverse creator and digital artist on-call for consultations on your projects “Lankesar made the comment.